Anyone with an interest in international art will have heard of Lionel Smit. At the very least, you’ll recognise his work, which graced the cover of the National Art Gallery’s BP Portrait Awards in 2013 and won him the ‘Viewer’s Choice’ honour. Having grown up in Pretoria with his sculptor father Anton Smit, he’s now based outside Cape Town in the beachy suburb of Somerset West, where he’s just opened a new studio and gallery space. As a barometre of his success, his work also appears in some of South Africa’s best boutique hotels. Following a recent trip to South Africa, we sat down with the artist to get his insider tips… 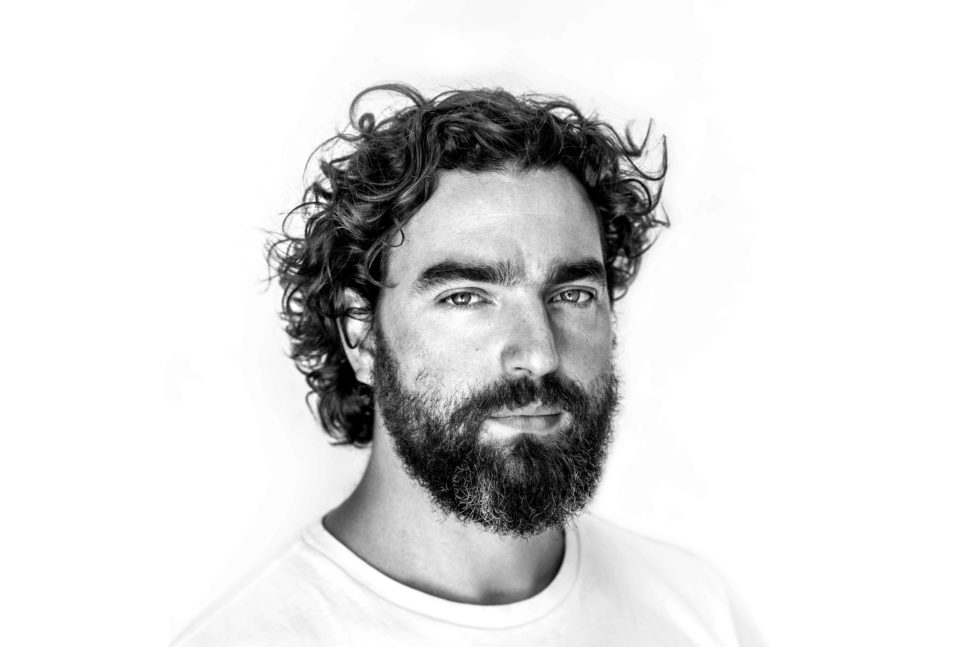 Describe the Pretoria of your childhood
Pretoria is an interesting place. Although it’s the capital of South Africa, there’s not as much to do there as Cape Town and Johannesburg. It’s basically a place where good artists come from and then leave for the bigger cities. But I think things spawn from boredom, like the grunge scene in Seattle. Why there? Because people can’t go to the beach and do other stuff, so they stay inside and be creative. I have good memories of growing up in suburbia, going to art school and being surrounded by an interesting creative scene.

How did your father influence you?
One of the cool things was that he had a studio in our house. At any given moment, there was a writer or artist living with us. Our house was an open door for creatives and all that energy rubbed off on me, so I started making sculptures and later paintings. 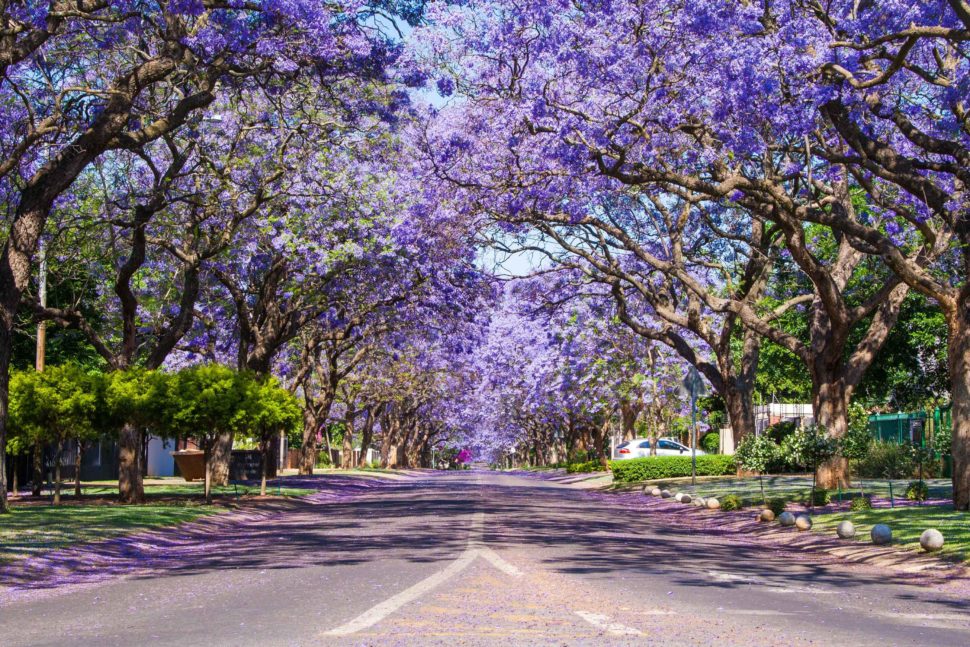 What were your holiday rituals?
KwaZulu-Natal, on the east coast of South Africa – especially Durban, where I’d go every year to visit my grandfather and spend time on the beach. It’s a tropical climate – hot and humid – where you can still go in winter, as the sea’s warm. Those holidays were the best.

You now live near Cape Town: tell us about that move
When I arrived 10 years ago, it wasn’t quite so vibrant. But what’s happened in the last decade, is that the focus of South Africa’s art scene has shifted. A lot of big galleries that had places in Joburg, opened up branches in Cape Town and, slowly but surely, the city became the next big art scene. 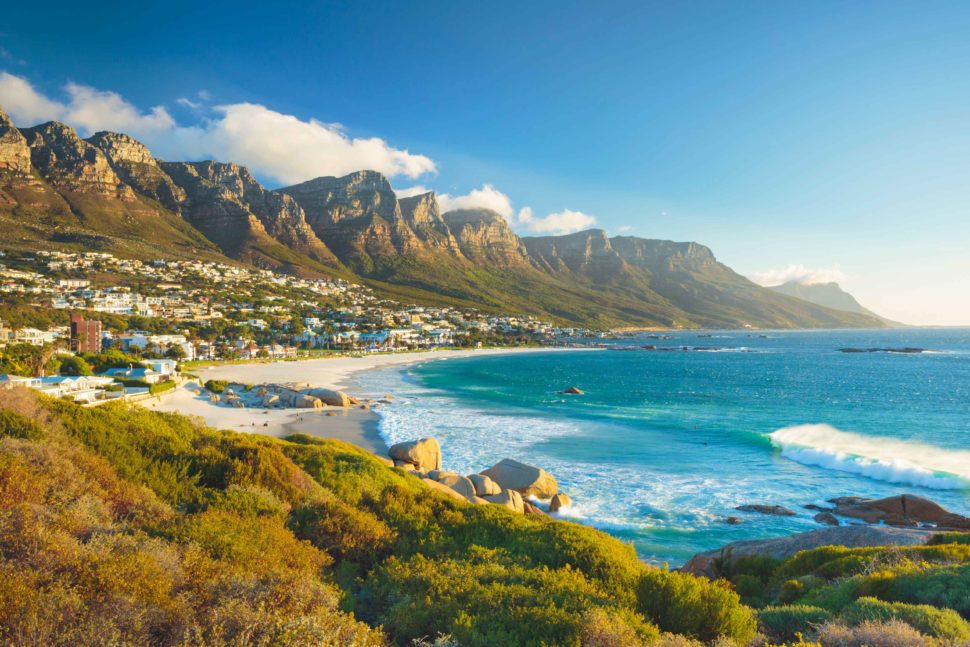 Favourite things to do in the city?
As a result of Cape Town becoming the new capital of art in South Africa and places like the Zeitz MOCAA museum opening up on the V&A Waterfront in a old grain silo, it’s given rise to amazing restaurants, too – like the Test Kitchen in Woodstock. Then there’s gallery hopping: we have First Thursdays when people from the surrounding areas all stream into the city and the whole place becomes like a big nightclub with everything open late.

Cape Town’s known for its coastline, any hidden beaches?
I’ve just moved into a new studio in Somerset West – an area outside Cape Town that borders a beach called Strand. It’s an amazing coastline and one of the next places that’s starting to boom. People are moving in, restaurants are opening up and they’re upgrading the promenade. The Helderberg mountains rise to the back and behind them are Stellenbosch and Franschhoek, so it’s part of a triangle between the Winelands, the coast and the city. 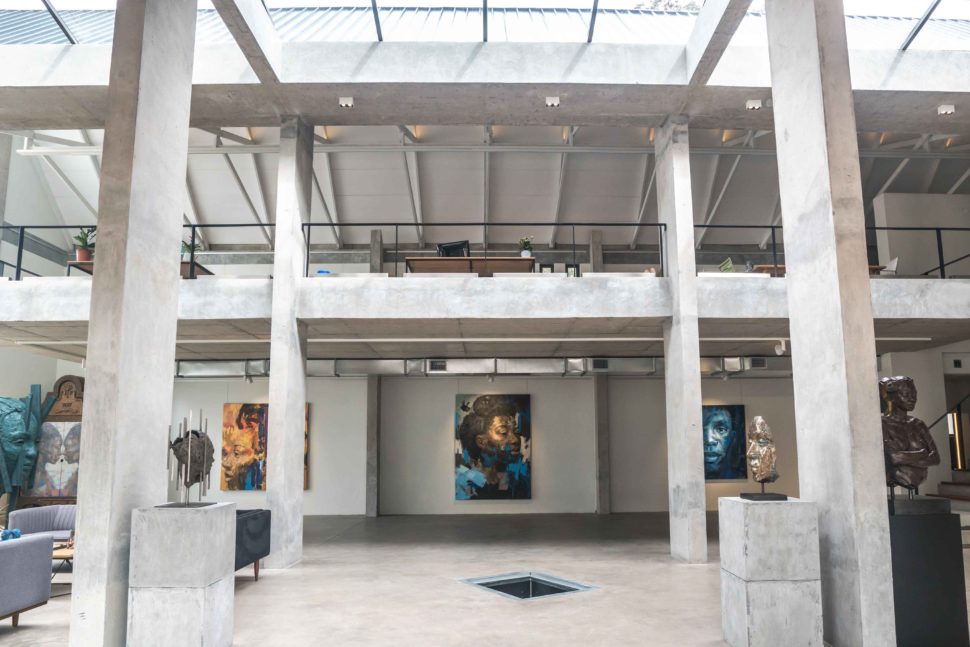 Other up-and-coming neighbourhoods in Cape Town?
Woodstock is still exploding and growing closer to the city, with wine festivals and big buildings dedicated to artist residencies and studios. In fact, the whole city is slowly but surely being regenerated.

And the 2013 BP Portrait Award: was that a turning point?
Definitely. My career was already lifting off here, but when I did that – and entered the piece ‘Kholiswa’ into the awards – it was a non-biased opinion of my work. It’s one of the works I’m keeping in my personal collection to display at the new studio in Somerset West. 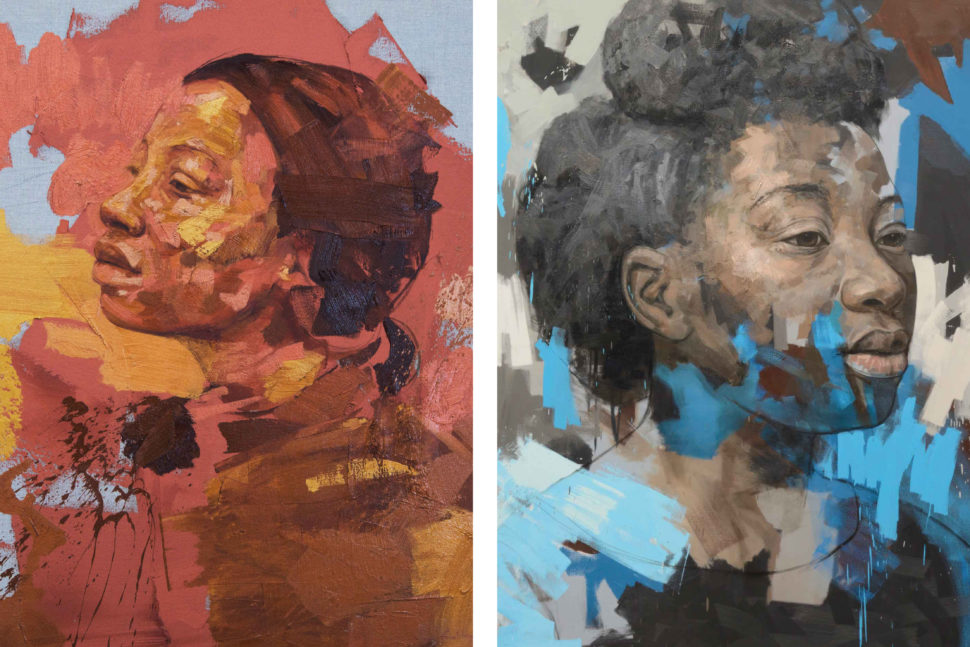 You work with lots of different hotels, what’s it like contributing to those collections?
Amazing, because places like Ellerman House in Cape Town and Delaire Graff Estate in the Winelands have international clientele that has put me on the map. People started seeing my work when I began collaborating with those hotels.

Any favourites? What makes a hotel special?
Ellerman House is amazing. It’s a little bit different to other Cape Town hotels: high end, but still very cosy. Then De Hoop Nature Reserve is an under-the-radar whale-watching place, with Morukuru Beach Lodge and Morukuru Ocean House overlooking the coast. Their sister property, Atholplace, is where I stay when I’m in Joburg for shows. 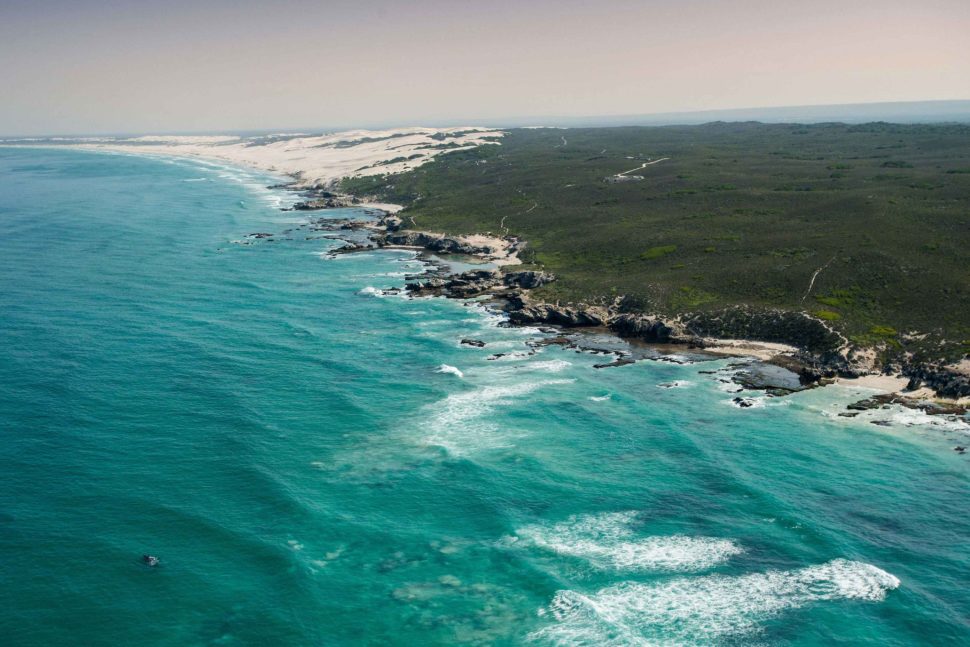 Best places to eat/drink in the Winelands?
What’s nice about the Helderberg area, is that the Winelands actually extend all the way down to here. There are amazing places like Waterkloof Estate, a wine farm with a restaurant, and Idiom, an Italian-owned restaurant and tasting room, which overlook the whole Helderberg Valley, as far as Muizenberg beach in Cape Town. Then there’s the Stables restaurant at Vergelegen, a beautiful family oriented estate, with grounds that run on and on, and a 17th-century house surrounded by 300-year-old trees.

What’s the story behind the portrait of Mr Graff in the lobby of Delaire Graff?
I actually met Laurence Graff through my father, quite randomly. I was busy helping my father offload one of his sculptures at Delaire and Laurence asked me what I did. I told him I was a painter, so we had lunch and I showed him my work. The rest is history. He bought some pieces, which led to him asking me to do a portrait. Luckily, it turned out ok, because private commissions can be nerve wracking. 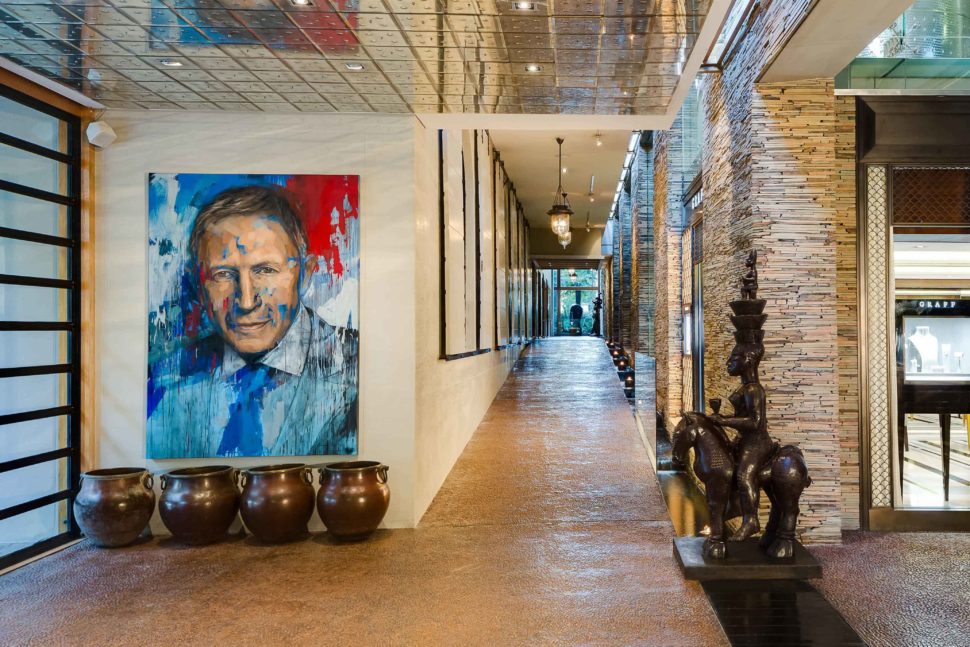 Must-see stops along the Garden Route?
Wilderness, Knysna and Plettenberg Bay. Wilderness is a bit more wild: the beach is amazing and feels so isolated, like you’re the only one. Knysna is a family friendly town: lots of activities, set around a lagoon, with boat rides and canoeing. Then Plett is all brunch spots and where people from Cape Town have houses. Finally, Tsitsikamma Forest is known as ‘the garden of the Garden Route’. There’s a famous book, that used to be compulsory reading in school, called Circles in the Forest, about the time when there used to be elephants there. Apparently, there are still a few hiding in the bush…

Which bring us nicely on to the best wildlife spots in South Africa…
Kruger National Park is the top place to go, with hundreds of game lodges. But there’s also a lot of marine life to see on the way to the Garden Route: including whales in Hermanus, Gansbaai and De Hoop Nature Reserve. 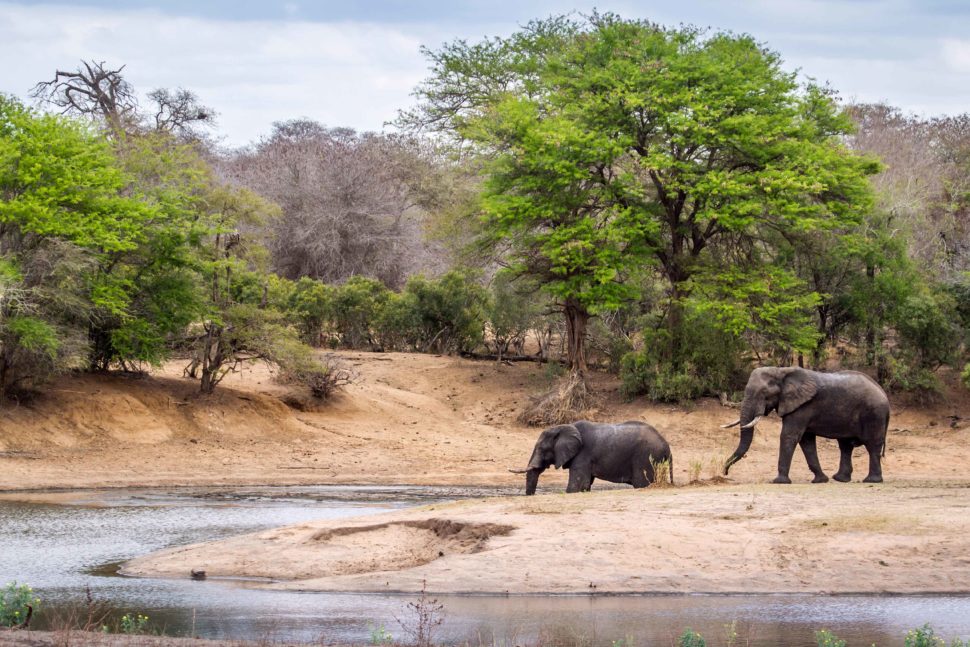 Is South African art enjoying a golden era at present?
I think it’s the influence from overseas visitors. We’ve always had a big art scene, but it’s been allowed to flourish because the market is there now. The end of Apartheid also gave a lot of black artist opportunities.

You’ve exhibited all over the world: which international destinations inspire you?
London and New York, of course. When you visit big cities, you’re reminded that Cape Town is a playground. Also Finland: I did an exhibition at the Didrichsen Art Museum, which has one of the largest collections of Henry Moore’s in the world, and visited some of the islands in the Helsinki archipelago.

Finally, what’s on your bucket list?
I’d still love to do Victoria Falls and spend more time in Berlin and the south of France. Then Mauritius: we go every year as a family, as it’s so easy to reach from South Africa.

For more inspiration on the Rainbow Nation, see our boutique hotels in South Africa…