Couples, newlyweds, honeymooners: lend us your knives and forks. Tonight, we feast on India’s most romantic meals – specifically, Rajasthan’s most romantic meals. And we aren’t talking any old humdrum restaurants here. No, we’ve hunted high and low across India’s largest state, from its dramatic deserts to its hilly hinterland, for out-of-this-world experiences that combine India’s best cuisine with a generous side-serving of candles, lanterns, folk musicians, sitar players and camels (yes, camels). Because, of course, you need romantic hotels on your honeymoon. But it’s the little extras that make you fall head over heels… DERA AMER | JAIPUR
What: This romantic retreat, an hour north of the Pink City, seduces cooing couples with its safari-style tented camp, set in a glade of acacia trees on a 180-acre farm. The golden folds of the Aravalli Hills rise all around and at dusk you’re guided up to find the best sundowner spot, where ice-cold drinks are served alongside views of rural Rajasthan. Two rescued elephants, Laxmi and Rangmala, live on the farm, sometimes joining you for breakfast. But otherwise, honeymooners can have the whole camp to themselves…

To dine for: At night, this already-romantic camp lights up with lanterns around the tents and candle-lit pathways. You might hear the distant sound of a ravanahatha (traditional Indian string instrument) playing across the farm from a centuries-old cenotaph. Beside that, the serene silence of night reigns. Staff set up a private table under the trees and serve an atmospheric alfresco dinner beneath the stars. There’s no light pollution around Dera Amer, only a handful of rural hamlets and Hindu temples, so the nighttime canopy is arresting.

Food of love: Everything from pomegranate to papaya, potatoes and peas are grown on the farm and served up in meals. For dinner, expect home-cooked curries and dahl (lentils), plus charcoal-warmed roti bread and fragrant rice.

Romance rating: 8/10 – seductive, but let’s save some space for the next helping. RAWLA NARLAI | ARAVALLI HILLS
What: Some of Rajasthan’s best scenery awaits on the road between Udaipur and Jodhpur – and Rawla Narlai makes the perfect resting post. Replete with character, rooms range from heritage hideouts, with stained-glass windows and mural-lined walls, to contemporary suites that still hark back to the age-old haveli style. Courtyards, fountains and roof terraces connect the space, and there’s a pool and spa for post-wedding pampering.

To dine for: Throughout Rajasthan, particularly in rural areas, ancient stepwells once served as a vital way to harvest monsoon rains. Today, many of these age-old irrigation tanks lie in ruins. But at Rawla Narlai, one such site has been creatively restored and is now used for an atmospheric ‘medieval stepwell dinner’. The experience starts as you’re collected outside the hotel’s walls and transported by traditional ox and cart through the Aravalli Hills at night. Lanterns light the way as you approach the 16th-century stepwell, illuminated by thousands of candles. At one end, a saffron-robed musician plays the sitar, as you dine from luxurious banquet-style couches.

Food of love: You’ll be served a meal fit for a maharaja on polished thali platters holding mini pots of regional Rajasthani cuisine. Tender mutton, rice and raita arrives alongside  chapati cooked on an open fire.

Romance rating: 9/10  – the yogi’s folk songs make this a meal to remember. MIHIR GARH | THAR DESERT
What: Built 10 years ago by the royal owners of sister hotel Rohet Garh, this golden-hued palace emerges from the flatlands of the Thar Desert near Jodhpur. Also known as the Great Indian Desert, this vast sandscape stretches over north-western India and beyond into Pakistan. At the hotel, there’s romance around every corner: nine opulent suites, each with a Jacuzzi or plunge pool; sun-dappled terraces for taking in desert views; flower-filled gardens that attract abundant birdlife; and a spa set in a walled garden.

To dine for: For your final serving of just deserts, please be seated for your ‘shikar dinner’. The name nods to the days of royal hunting parties, when British and Indian nobility would often camp out in the desert. From the front courtyard of Mihir Garh, you’ll be greeted by your ride. We promised you camels and we don’t like to disappoint, so your friend awaits. You’ll hop on a cushioned cart, which will carry you down sandy desert tracks out to your dinner reservation in the wilds of the Thar. Here, gin and tonics await, as well as traditional folk musicians, who perform songs and dances by firelight. Afterwards, you’ll be led down lantern-lit pathways to your tables, secluded in a forest clearing.

Food of love: Dishes might include the best chicken biryani you’ve ever had, dahl and roti, followed by light-as-a-feather tiramisu served in a traditional clay pot.

Romance rating: 10/10 – the perfect way to end your honeymoon, teamed with some downtime at this memorable luxury hotel.

HOW TO DO IT
See Mr & Mrs Smith hotels across India, including Rajasthan.
For flights, British Airways flies daily between London Heathrow and New Delhi.
V Care Tours and Travel is a tried-and-tested car service in Rajasthan, offering transfers between all destinations, hotels and sightseeing stops: info@vcaretours.in.

About us
Welcome to WordSmith – the online magazine for the Mr & Mrs Smith travel club. Want to know more? Right this way...
Close
Subscribe
Thank you for subscribing!
Hotels trending in Rajasthan
Samode Palace 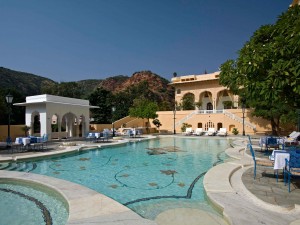 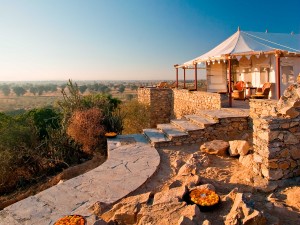 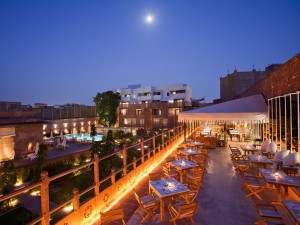 Off the tourist triangle 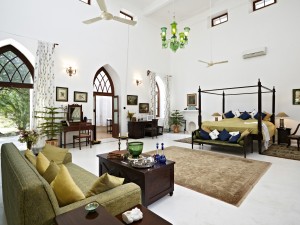 Off the tourist triangle
Amanbagh 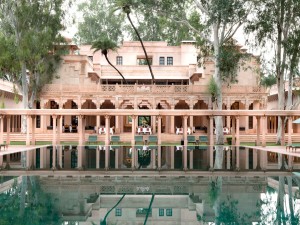