Tokyo is a dizzying sugar rush of a city, as colourful and sweet as a bag of pick ’n’ mix. Otaku (super-fan) culture ensures an endless run of yoof-focused distraction, and Japan’s love of kawaii (Hello Kitty-style cuteness), mascots and anime – plus the outlandish fashion in the Harajuku and Shibuya ’hoods – make some parts of the city feel like a foray into Toontown. Trust us, kids will love it.

Tokyo is also spotless and has a reassuringly low crime rate, so it makes a first-rate family-holiday destination that’s as much fun for adults as it is for little ones.

Novel ideas
Its shrines may offer quiet reflection, but otherwise Tokyo is go go go; you have to work hard at being bored here. Embrace the wackiness as a family; hit the photobooths at Purikura no Mecca for above-average holiday snaps and IRL Snapchat filters. Keep spare change on hand for gachapan – vending machines spitting out everything from Dragonball Z figurines to anthropomorphic plastic sausages – and the quirky drink, soft-toy and snack machines you’ll find throughout the city.

We are amused
Disneyland is Tokyo’s big-ticket park – every bit as magical and mouse-infested as its US counterpart. Sister attraction DisneySea is unique to Japan and has a thrilling array of temples and fortresses, and subaquatic rides (dress for splashback). Hanayashiki amusement park in Asakusa, is the oldest in Japan; its rides are by turns sweet (merry-go-rounds, a Ferris wheel) and knuckle-whitening (rollercoasters, space launchers), but the best reason to visit is the larger-than-life motorised pandas you can ride around the park.

The Asakusa Shinto shrine close by is often surrounded by a market offering mochi sweets and trinkets; and women gracefully swan about in geisha gear. Kitty White (better known as ‘Hello Kitty’) has her own pastel-hued park, Sanrio Puroland, an hour’s drive outside Tokyo near Machida. This toothache-sweet park has mini Melody-bunny-themed trains, dress-up stations, parades and gaming arcades. There are cameos from Kitty sidekicks Pompompurin (a dog), the Melody Star twins and Gudetama (a strangely cute depressed egg-yolk), and the coquettish feline’s 50-shades-of-pink home to roam around – the Escobar mansion to Barbie’s dream condo. 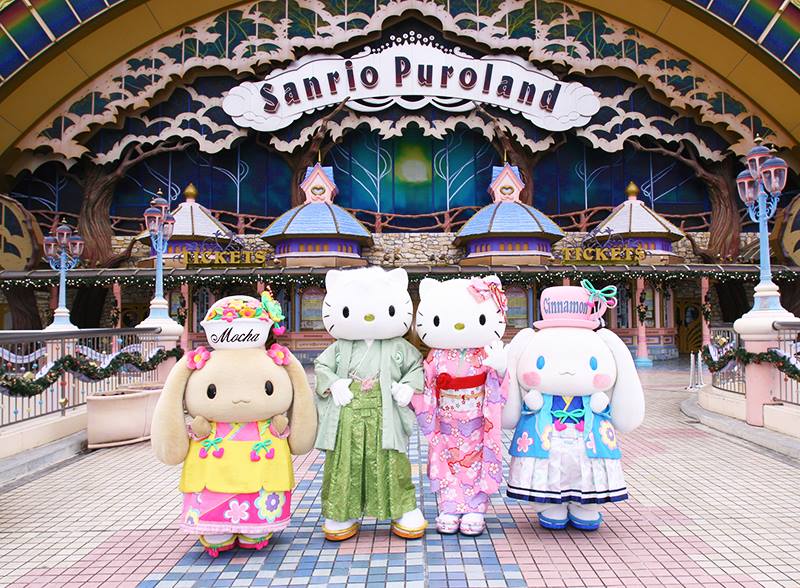 Learning is cool (thumbs-up emoji)
Asimo is an all-singing, all-dancing, all-football-playing humanoid robot who functions better than some people (it knows sign language too). This wired wunderkind lives at the National Museum of Emerging Science and Innovation (Miraikan), where permanent exhibitions tackle medicine and the universe. But, real talk: you came here to make a robot friend, and, if Asimo doesn’t tick your BFF boxes, the museum has a clique of not-at-all-creepy androids to chat to.

Anpan is a delicious Japanese bun filled with red-bean paste; Anpanman is a superhero whose face is made from anpan – in your non-dessert face, Batman! Baffling origin story aside, he’s been a beloved character for decades, and his museum is a vividly coloured intro to him and his freshly baked friends (Currypanman, Melonpanman… You get the idea) in their fight against a germy villain called Baikinman. Welcome to Japan, kids!

Park up
Yoyogi Park is where to spot Lolitas, goths, ‘Roller Family’ rockabillies, cosplayers and other fashion tribes bleeding out from nearby Harajuku. Joining in the fun are street performers, musicians and distractions such as pet dogs being walked in prams. Pick up a picnic of bao (stuffed buns), onigiri (simply flavoured, seaweed-wrapped rice patties); katsu-stuffed sandwiches and honenashi (fried chicken) from a 7/11, and sit back to watch the madness play out. You can also hire bikes to ride in the park, and Dog Heart café, on the southwestern edge of the park, offer a ‘dog rental’ service, so you can walk one of their friendly pack. From March to April, the park has a blushing canopy of sakura (cherry-blossom flowers). If your little ones are pony-mad, Yoyogi Pony Park, close to Sangubashi station, frequently offers free rides. 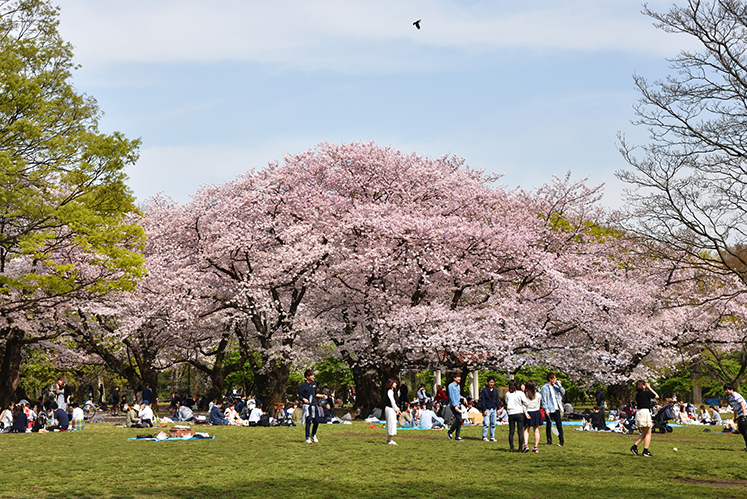 Brace yourself, parents; Tokyo is a) pricy and b) home to a bevy of incredible toy shops. To avoid tantrums, stock up on Yen, set your limit and get ready to covet. In Harajuku, Kiddy Land is a high-rise stuffed with all things fun. Whether you want plushies of Sanrio and Ghibli characters, vinyl Be@rbrick figures, Blythe dolls, and all manner of niche merch, you’ll find it in this giant playbox. After, stroll down Takeshita Street, which is lined with the neighbourhood’s coolest boutiques and most temptingly scented crêpe stands. In Akihabara, the first few floors of Yodobashi Camera are a cornucopia of electronics; but beyond the Technicolor-dream USB cables and treasure trove of label-makers, the top floor is toy heaven. Japanese-stationery geeks can find stickers, stamps, themed notepads, confetti, multi-coloured pens and so much more at Loft in Shibuya.

Characterful cafés
In a country where fish sperm and fermented soybeans are considered delicacies, dining may be difficult with fussy Western eaters. But if your little ones haven’t developed a taste for jellyfish or fugu (Japan’s infamous and occasionally deadly pufferfish), there are plenty of eateries to appeal to tots. Harajuku Monster Café sits atop of an unprepossessing mall in the Shibuya district; inside, it’s loud, colourful and as cool as any Harajuku hipster. Servers look like 1980s club kids, in outfits of towering platforms, neon bodystockings and candyfloss wigs that make RuPaul look shy and retiring. The menu is bonkers, too, with rainbow cereal served in a cat’s bowl, unicorn pancakes or mix-your-own te st-tube cocktails. You’re in Japan, so naturally there’s a musical breakdown between your main and dessert, where servers take to the central monster-go-round for an impromptu sing-and-dance-along. Almost every cartoon character has a themed café: Hello Kitty, the Moomins, Miffy, the Peanuts gang, a line-up of Sanrio critters (we like the Pompompurin caff best) and Totoro cream puffs are served at the Shiro-Hige Café in the Setagaya ward. 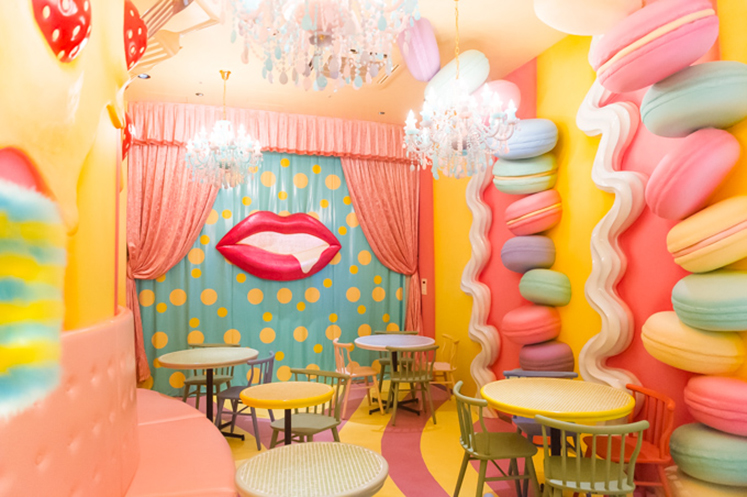 Animal encounters
There are lots of places in Tokyo where beastly dining companions are welcome. There are more cat cafés than you can swing a moggy at, each catering for a different flavour of cat fancier: find fluffballs at Harajuku MoCHA; spy Scottish folds at Temari no Ouchi; and some Maine coons at Cat Café Cateriam. Dine with good boys at Dog Heart; pet cottontails at Ms Bunny; live out your Harry Potter dreams at owl café, Fukurou Sabou; then join Slytherin at the Tokyo Snake Center. Unfortunately there’s no place to eat like a pig in with a pig – yet – but we’re sure it’ll be a porker when one does materialise.

Teenage kicks
Gaming-mad teens should hit Akihabara, which feels like an immersive computer game before you’ve even hit the arcades. Neon flares and jitters on every façade and J-Pop trills madly from open doorways. Taito Game Station and Club Sega are high-rises packed full of flashing machines and ringing with jangling 100 Yen pieces, the sing-song, 8-bit beep-boops of retro game music and the odd ‘Hadouken!’. A quick note to parents – the be-shirted city workers who stay pounding buttons till late are allowed to smoke in some arcades; the atmosphere may be less muggy if you visit earlier in the day. Go a few rounds, try your luck on the many claw machines, then swing by Super Potato to pick up an original Pac-Man cartridge and a Goomba plushie. The Super Mario theme tune will never leave your head again. For something a little more traditional – well, kinda – the Ninja Akasaka restaurant is a surprisingly dedicated eatery, where servers wear full costume and some dishes come served on a samurai blade.

About us
Welcome to WordSmith – the online magazine for the Mr & Mrs Smith travel club. Want to know more? Right this way...
Close
Subscribe
Thank you for subscribing!
Hotels trending in Japan
Beniya Mukayu 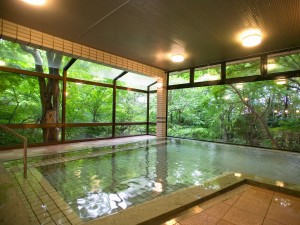 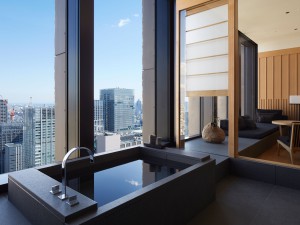 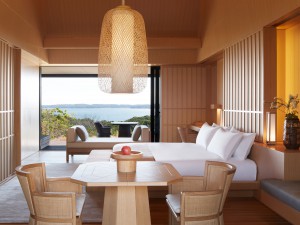 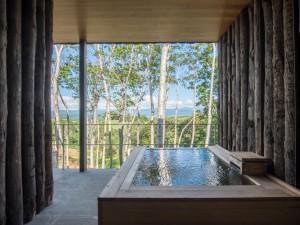 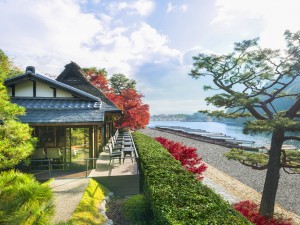