To dine in Mallorca is to wind back to the beginning. Theirs is a cuisine informed by ancient farming methods and respect for seasonality and simplicity: a story sown in fertile soil. Mallorcans know which style of cruet to use for their first-pressing oil; each family has their own private alchemy for filling sobrassada sausages; and bread has been assigned two patron saints: St Honoratus and St Pancras. Pa amb oli – bread baked over two days in a clay oven, dipped in oil and scrubbed with garlic or tomato – is still the island’s go-to snack. It’s so ingrained in the national psyche that there’s even a band named after it (which Catherine Zeta Jones and Mike Oldfield have both joined onstage), and the order of ingredients sparks as much debate as an Englishman making tea milk-first. However, Mallorca’s rustic table is being cleared to accommodate chefs with fresh ideas, and savvier diners who want the ‘garden of Europe’s produce presented to them in increasingly surprising ways.

Mallorca’s cosmopolitan capital Palma (note the cathedral to the left)

But first, an amuse-bouche. In 1900, when Édouard and André Michelin printed their first restaurant guide, they were simply trying to flog tyres in an era when smiths made more of a buck affixing horseshoes. Alongside their tyre-man mascot (then a bon vivant, officially named Bibendum, sporting a pince-nez and cigar), the guide – now the stuff of chefs’ whitened knuckles – encapsulated two of the greatest joys of travel: the journey and the food.

In this spirit, I’ve come to this Balearic beauty spot, which currently holds an impressive 10 Michelin-starred restaurants. Tiny Faroese isle Tangafjøður earned more column inches for its first star last year, but consider that Mallorca’s smaller than Devon (the UK’s coastal escape, which lags behind a little with seven starred eateries), yet it’s achieved a culinary constellation in just two decades. Forerunners Bou and Zaranda have earned their place in the heavens for 15 and 10 years respectively; but credit, in part, is due to Marc Fosh, a Kent-born chef whose molecular artistry and passion for Mallorcan produce has helped to shift the meaning of ‘Brit on the costa’ from lobster-tanned lush to ‘just hoisted from the sea’ crustacean served on sake-spiked Acquerello rice, with a bouillabaisse sauce.

He’s the first non-Spanish chef here to earn a star for his eponymous restaurant, and he’s trained many of the next generation of likely recipients. He has an eye for location too, setting up shop in Convent de la Missió, Palma’s first boutique hotel in the old town. This 17th-century former monastery and boarding school is a post-meal waddle from La Ramblas, Plaça Major, Passeig des Born, the brutish cathedral, and shopping stretch, Avenida Jaume III. If you can stomach it, you could complete the full coast-to-coast Michelin lap in three days, but over a short break in Palma alone you can prop up pintxo stalls (La Rosa’s cod croquetas pair nicely with a shot of vermouth), try the taquerias and street-food stalls in hip Santa Catalina (Aquanauta’s laidback cool and Naan’s Peruvian ceviche are molt bé), stop for a mint-flecked, Sóller orange sorbet at a gelateria, sample the pescadores’ haul in San Llotja’s eateries and then dial it up at Fosh before succumbing to a food coma upstairs. The monastery’s vaulted ceilings, weathered stonework, wood beams, faint frescoes – and rooftop cross – have been preserved and updated using glass panels and idiosyncratic artwork. The monks’ wine cellar is now a spa with sauna and pool, which guests can book privately, and the roof terrace has a pool and phone for summoning drinks – dapper mixologist William has a neat party trick of intuiting your preferred poison at a glance, assigning me a piña colada with star anise, then a rum- and wine-heavy concoction inspired by a Cuban deity. It’s uncanny. My Junior Suite is vow-of-silence quiet, dressed in cream and latte hues, with quirky touches: lamps wearing tutus, penitent-style, cross-marked slippers, a cleanly cracked dinosaur-egg-shaped bath tub by the bed…

For all the jellyfish sculptures and edgy bean bags, Catalan aphorisms writ large on the walls and Fosh’s left-field flavourings (aloe, plankton, pollen), the hotel’s a traditional sort. Charmingly, its west wing has no public first floor, because this is where, in the refectory of La Misión de San Vicente de Paúl church, six monks – not the originals, mind – still live: ‘The youngest is around 80’, hotel manager Javier tells me. I spy these elder statesman while wandering the hidden carrer the hotel sits on, and marvel at the past breaking bread with the present.

So it goes with Mallorcan cuisine. Even the most avant garde menu is as deeply rooted in the past as Palma’s gnarled Cort olive tree, the citrus groves of Sóller to the west, and the vines in the Binissalem appellation, where Roman invaders first cultivated vineyards around 2,000 years ago. Fosh strongly supports the Slow Food movement and champions local producers: ‘Thinking globally and sourcing locally is not just politically correct; it’s also personally rewarding for the farmer, the chef and the diner’. He swears by Arbequina olive oil (the best can be sourced from groves in Pollença, sheltered by the Serra de Tramuntana range); Flor de Sal, refined from salt flats in Es Trenc; red prawns from Sóller, prepared with just salt, oil, parsley and garlic; lambs from the surrounding hills; Mediterranean scorpion fish… A new project involves breeding acorn-fed black Iberian pigs and chickens, and cultivating a herb garden for a farm-to-table restaurant. Fosh’s own wines – Blanc, Negre and Rosé – are bottled in Mallorca’s oldest bodega, family-run winery Ribas. Alongside these, sommelier Gabriel’s wine list stars bottles from bodegas in Binissalem, Manacor and beyond; 25 per cent of the list is from Mallorca, but recently he’s had to uncork his more outré picks: ‘Before, tourists visited the beaches; now they come to the city. I’ve noticed guests asking for different types of wines. It’s good because we can improve our list and work with smaller producers, add natural wines, which 10 years ago no-one would buy.’ He’s keen to introduce amateur oenophiles like myself to Catalonian rieslings, Canary Island vintages, Malagan dry whites such as Pero Ximén, and – I note with a surge of national pride – Sussex-based sparkling wine Nyetimber. And he’s an excellent spokesman for Spanish sherries.

A lavender-scented lounging spot on the roof terrace

My thirst quenched, the manager of Marc Fosh Catering, Kevin Becker, shows me the cornucopia that is the Mercat d’Olivar, just a four-minute walk away, where Fosh sources ingredients. It’s a visceral experience, not for the squeamish: squid still squirm, octopuses slither on steel counters, and monstrous tuna are hacked into prized fatty fillets and raw red flesh by cleaver-wielding mongers. Pedlars mime the attack stance of leopard-spotted eels, monkfish have faces only monkfish mothers could love; I learn to only buy squid that’s still purple, to boil salted bacalao in milk to make it edible, and that wild asparagus can be foraged in Palma’s weeds. I try tidbits of sheep’s cheese and sausage, learn how tomatoes are hung until their insides are soft enough to scrub on bread and the calendar of seasonal produce. This abundance chimes well with Fosh’s philosophy: ‘No cream, no butter. Keep it light and healthy with pure flavours. I like the idea of ‘clean food’ where natural ingredients can really shine.’ Mixologist William working his magic in the lobby lounge

A dedicated locavore, chef Andreu Genestra is a Fosh and El Bulli alumnus, who won his own star for his restaurant in Capdepera, an hour’s drive away on the other side of the island. He grows fruit and vegetables on site, rears pigs, produces wine and beer. ‘The guests here know that the veal has come from 20km away, the fish arrived just this afternoon…’ he explains over lunch on his pergola-shaded terrace.

‘Mallorca is a place everyone wanted to have. Phoenicians, Romans, Muslims, Jews – then it came back to the Christians, but everyone left some seeds.’ He’s alluding to dishes such as meaty panades (Easter pies) or offal-laden frit stew, both of Jewish descent; and the Moorish legacy of almond trees and sweet-sour pairings (sobrassada with honey). Mallorca has benefitted from too many cooks, but the new wave of gastronomy sees chefs with Mallorcan heritage looking beyond the sky-sea-sand horizon.

Meal with a view…

‘This generation work outside the island to pick up techniques, then they come home and apply them to Mallorcan produce.’ Genestra followed India’s spice route; Fosh previously worked in London, France and San Sebastián. Back in Palma, another Michelin-recognised Fosh mentee, Adrián Quetglas, brings Argentinian flair, enlivening herring salad with pickled apples, sprinkling liquid-nitrogen-blasted ‘ham snow’ over pea soup, and adding a shot of passionfruit to veal cheeks in asparagus purée.

My meal at Fosh displays equal showmanship; dishes arrive to ‘oohs’ and ‘aahs’: cheese hearts bound in sweetened beetroot gel; rosehip- and plankton-infused tomato consommé poured from a smoking teapot, citrussy wild sea bass and saffron-crusted lamb styled with the precision swagger of a Beyoncé album drop. A duo of desserts – one mango gel and cardamom cream masquerading as a smashed egg; the second, chocolate textures enriched with a red-fruit sorbet – round off the meal as spectacle.

It’s theatre, yes, and unashamedly mannered – pity the rush-hour sous chef plating a ‘beached starfish’ scene made of artichoke with banana ganache. As Fosh states, ‘The hospitality business is fast becoming the entertainment business.’ But, strip away the garnish and his menus read like love letters to Mallorca, reverently unveiling the ingredients’ provenance. Like the ensaïmada pastries served at the hotel’s breakfast buffet, made in fourth-generation family bakery Forn Fondo; the wine produced to a method dating back millennia; or the Old Fashioned given a personal twist by the inventive mixologist, every morsel has a story. And, whether you want the simple pleasure of a tomato salad with grilled lamb cutlets (Fosh’s preferred summer meal), or the sophistication of scallops with cauliflower and white chocolate (one of his more madcap creations), it’s a story Mallorca is just starting to tell.

For more ways to experience summer 2018, check out a Californian take on utopia at Native hotel in Malibu; explore Tuscany’s land of plenty at Borgo Pignano in Italy; go night riding in Portugal; and read about the world’s best oysters at a noble French château.

About us
Welcome to WordSmith – the online magazine for the Mr & Mrs Smith travel club. Want to know more? Right this way...
Close
Subscribe
Thank you for subscribing!
Hotels trending in Mallorca
Mirabó de Valldemossa 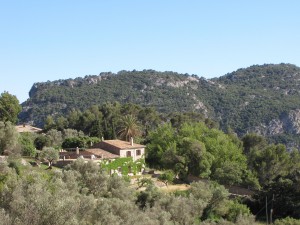 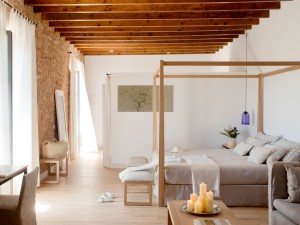 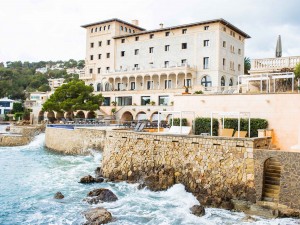 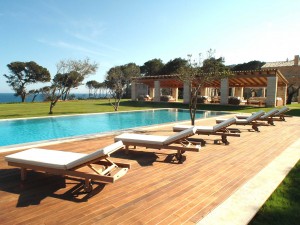 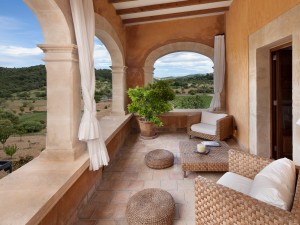